American Hustle Soundtrack List (2013) – Tracklist, score list details, all songs played in the movie – playlist and who sings them. 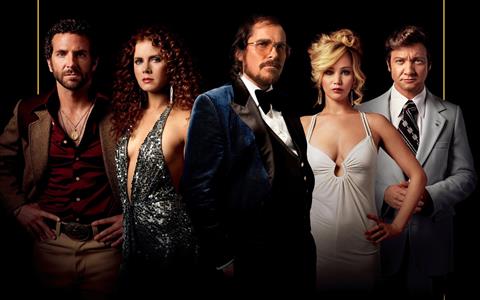 Have a look below to see the official soundtrack list for the 2013 crime movie, American Hustle.

1. Jeep’s Blues – Duke Ellington
Song from the beginning of the movie and from pool scene

3. White Rabbit (Arabic Version) – Mayssa Karaa
In the scene where Victor tells the guys to put the money in bank

5. Live and Let Die – Wings
Song by Rosalyn while she is cleaning

6. How Can You Mend a Broken Heart – The Bee Gees
Scene where Rosalyn and Sydney kiss

7. I Feel Love – Donna Summer
Sydney and Irvin go to the club

8. Don’t Leave Me This Way – Harold Melvin & The Blue Notes
Music playing in the bathroom scene from the club

9. Delilah – Tom Jones
The mayor and Irvin sing this track

10. I’ve Got Your Number – Jack Jones
In the scene where Irvin is talking about his feelings for Sydney

11. Long Black Road – Jeff Lynne
In the scene where they meet the attorney of Tellegio

12. A Horse with No Name (Album Version) – America
Scene where Irvin is dressing and preparing

13. Stream of Stars – Jeff Lynne
Music playing in the scene where Richie eats in the bathroom

2. Papa Was A Rollin’ Stone – The Temptations

3. I Saw The Light – Todd Rundgren

When the police is celebrating that they caught on tape the confession of the attorney.

5. The Coffee Song (They’ve Got An Awful Lot Of Coffee In Brazil) – Frank Sinatra

Scene were Richie meets the mayor

When Irving and Rosalyn go out for dinner with the mayor and his spouse.

John Mathis – It’s Not For Me To Say